I’ll still getting back into the habit of these weekly postings, so
please bear with me!  Here is another repost, with minor
modifications.  I pray it is a blessing!  Once again, for
those of you not familiar with the project, check out our re-launch post
and project explanation here: http://yoursoulmatters.org/blog/project-ezra/

Thanks, and I hope this is a blessing!

One of the most vital aspects of God’s character, yet at the same
time often the most misunderstood, is the concept of God’s sovereignty.
The idea that God not only created everything, but controls and rules
over everything, is repugnant to the natural man. As Christians, we know
that God’s sovereignty is truly a gift, not a curse, but those outside
of Christ, because of their fallen nature, cannot get past their desire
for freedom (so called) and autonomy to see who God truly is, and what a
blessing it is to be His bond-slave.

I don’t believe there is any message that is so clearly presented in
the book of Job than the message that God is sovereign. It is very
clearly the point of God’s questioning of Job in the final chapters. But
even as early as chapter 9, this week’s suggested reading, it is clear
that Job understands something of that truth. However, at this point, he
is not rejoicing in God’s sovereignty. He is complaining about it. He
doesn’t understand what God is doing, he knows he has no recourse, and
he’s frustrated. If you have spent any time sharing the gospel on the
street, you have heard similar complaints, and likely have talked to
people who have walked away from church when things in their lives have
gone wrong. The problem of pain and suffering can be one of the most
difficult questions to deal with, for believers and unbelievers alike.
But when God brings you to a deeper understanding of what His
sovereignty means, it turns from a source of frustration to an amazing
blessing and a joy. Yes, God has allowed pain and difficulty, but He has
also promised that He will wipe away every tear from those who are
trusting in Him, and bring them into His kingdom.

So this week I encourage you, as you are reading, to challenge
others, and yourself, regarding the sovereignty of God. Present a God
that is sovereign in His power over His creation, and in His judgment of
His creation’s disobedience. Then, present a God who is sovereign in
salvation. Our God is mighty to save, and as Psalm 138 tells us, the
Lord will fulfill his purpose for you, and He will not forsake the work
of His hands.

All for His glory, Dan

In Job 9, Job asks questions and makes statements about who God is, and what He is like

They are questions that ought to make us pause and think.

Stop and listen for a moment, and you will see how these truths impact you

Job asks “Can a man be in the right before God? Who can contend with Him?”

Then Job talks about what God is like, about His power.

Job says that God removes mountains, and overturns them in His anger

He says that He shakes the earth out of its place

He commands the sun and it does not rise, and He seals up the stars

Job tells us God made the Bear, Orion, and the Pleiades. These are star clusters and constellations we still recognize today.

He ask if God snatches away, who will turn Him back? Who will say “What are you doing?”

And Job reminds us that God is not a man that we might answer Him, and there is no arbiter between us.

This whole passage emphasizes a message that is at the heart of the book of Job, and indeed the entire Bible.

It is a message Job understood in part, but not fully, until the end
of the book. And it is a lessen all of us need to learn, or to
understand better.

That truth is that God is sovereign.

When we say God is sovereign we mean that He has the authority and ability to do what He desires with His creation.

It means nothing happens in this universe unless He either causes it, or allows it.

1 Chronicles 29:11 says “Yours, O Lord, is the greatness and the
power and the glory and the victory and the majesty, for all that is in
the heavens and in the earth is yours. Yours is the kingdom, O Lord, and
you are exalted as head above all.”

The idea of a God in total control is a wonderful thing when He is a God who will take our side, and be our support.

But we get much more uncomfortable when He becomes our ruler, one who dictates what is right and punishes what is wrong.

We don’t want someone to control us. We want to believe we can and should control our own lives.

It come from a desire for autonomy, and ultimately, from pride.

But we are not our own. We belong to God, and He has made His power and authority clear, in the world around us, and within us.

God has revealed Himself to us in His creation

Psalm 19 tells us that the heavens declare the glory of God, and the skies proclaim the work of His hands

Romans 1 also tells us that what can be known about God is plain to
those who deny Him, because He has made it plain to them. For His
invisible attributes, He eternal power and divine nature, have been
clearly seen, being understood from the things that have been made, so
they are without excuse.

God has also revealed Himself in His word.

But even if you disagree with these truths, you cannot escape the law God has written on your heart

Our conscience is God’s internal witness to His existence. You know
you are wrong when you break His law, even if you try to suppress it.
You feel guilt when you sin, because you know you are guilty.

We will all stand in judgment before God one day. You may not have
thought much about that, or you may have thought that was OK, since God
sees your heart and knows your good intentions.

But God does know your heart, and that’s not a good thing

Consider the 10 Commandments. You would probably agree with many of
them. But a moment of reflection will show you that even those you agree
with, you have not kept.

GOD THROUGH A FEW OF THE 10 COMMANDMENTS, TO SHOW PEOPLE THAT THEY HAVE BROKEN GOD’S LAW AND ARE GUILTY BEFORE HIM.

In the gospel of Matthew, Jesus Christ told His followers to be perfect, as His Father was perfect.

All of us have fallen far short of perfection. All of us are guilty of breaking God’s law.

Guilty criminals like us deserve to be punished, and the punishment
we deserve for our rebellion against the God of the universe, is
eternity in Hell.

In Hell, those who have rejected God and broken His law will suffer
in a place of fire and darkness and pain, paying the price for their
past and continued hatred of God.

But though we deserve pain and punishment, God, who is not only sovereign but loving and merciful, made a way of escape.

We could not satisfy our sin debt, so Jesus Christ, God the Son, satisfied it for us on a Roman Cross.

When Jesus came to earth 2000 years ago, He lived the perfect life we never could, and then died a perfect death.

He nailed Himself, and our sins, to the cross. And there, justice was satisfied.

Then He rose from the dead, ascended, and now sits at God’s right hand.

Now, if you turn away from your sins and put your trust in Christ alone, you will still stand before God one day.

But when you do, God will no longer look at your sin. Instead, He
will look at His own Son, and see His perfection credited to you.

Only through that gift of grace, only through that perfect life,
substitutionary death, and representation before God on judgment day,
can you escape the Hell you deserve.

I deserve Hell, but I won’t go there.

I will spend eternity in heaven, but not because I’m good.

I will spend eternity in heaven because GOD is good, and because Jesus Christ died to save me.

If you are not, please, turn to Christ and live.

God is sovereign, and God is good. Humble yourself, throw yourself on His mercy, and He will save you.

And because God is sovereign, He will keep you, and you too will have
the joy of knowing God, and spending eternity in loving worship of Him.
Then you can say, as Paul did in his letter to the Philippians, that he
who began a good work in you will bring it to completion at the day of
Jesus Christ!

Dwell On Truth with Brenten Powers
Dwell On Truth is the media ministry of Brenten Powers. DWELL stands for Discipleship, Worship, Evangelism, Loving God and Loving people. We believe the Truth of Jesus Christ according to the Bible is the solid foundation that we should dwell on.
Episode 79: Ep. 8 Jesus Must Increase
by Dwell On Truth 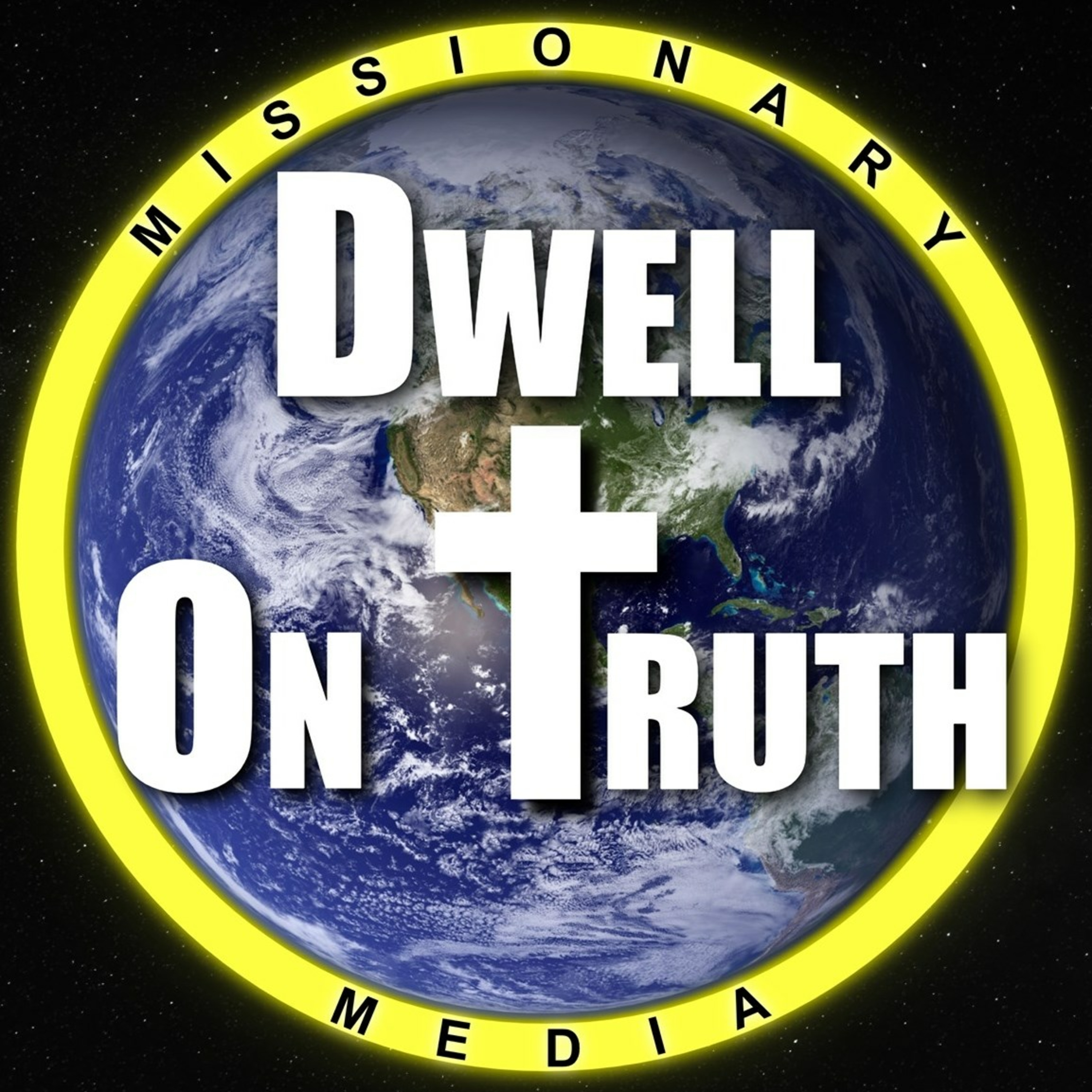